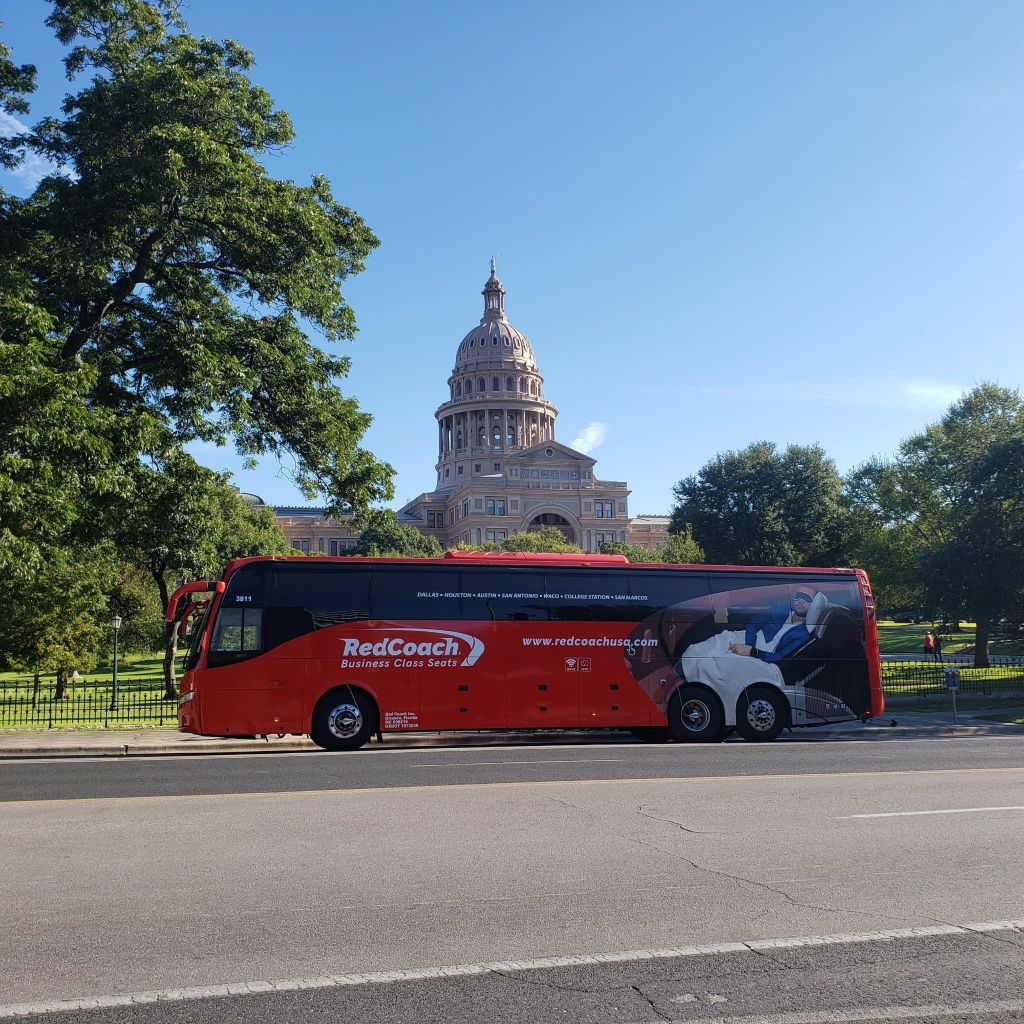 Tickets are on-sale now starting at $15 until Tuesday, Nov. 16

Similar to the airline industry’s pricing model, RedCoach offers dynamic rates with fares starting as low as $25. The maximum price for one-way is $60 and $120 for roundtrip. To celebrate the expansion of RedCoach into Texas, travelers can purchase tickets starting at $15 per seat, no matter which class, from now until Tuesday, Nov. 16 – which is notably Safe Driving Day. This offering is only available for Texas routes, and can be purchased at redcoachusa.com

“RedCoach is excited to expand to Texas and bring the market the first-ever, affordable luxury line-run service. Texas has grown tremendously over the past decade, and as more people and businesses migrate to the state, it makes sense for RedCoach to bring a new way of travel to the market,” said Florencia Cirigliano, Vice President of Marketing for RedCoach. “We have been the only premier luxury line-run service in the Southeastern region for more than a decade, and we believe in offering a bus travel experience that is stress-free, affordable and treats every passenger as first-class.”

RedCoach was founded in 2010 and has been positioned as the premier cost-effective, luxury bus travel service in the country as a result of its commitment to redefining what bus travel means. RedCoach’s fleet offers travelers first and business class options with quality amenities, including complimentary Wi-Fi, 110v power outlets, on-board entertainment, complimentary snacks and water, no baggage fees, and more. Additionally, RedCoach luxury motorcoaches are custom-made fitted with 26 seats offering guests additional comfort with spacious legroom and bed-like seats that recline up to 140 degrees.

RedCoach offers nonstop, daily routes available at strategic locations in central areas with easy access to the I-35. RedCoach’s Houston stop is at the Marriott Residence Inn located at 904 Dallas. The Austin stop is at Embassy Suites by Hilton located at 300 S. Congress and Dallas travelers will depart and arrive from 513 S. Lamar, walking distance from The Kay Bailey Hutchison Convention Center Dallas. Texas A&M Aggies and locals to the Bryan-College Station area can catch the RedCoach bus on-campus at 188 Bizzell St. while Baylor Bears and Waco citizens will depart and arrive from 1020 S. 5th Street.

Over the last 10 years, Texas has experienced exponential growth with approximately more than 4.2 million people migrating to the state. As the population continues to increase and the travel industry rebounds, there are more cars on the road, causing travel times and traffic to increase as well as airline fares to surge.

“We are entering peak travel season with the holidays quickly approaching, and we are continuing to see demand for travel increase, which will only drive airline ticket pricing higher. When you factor in the cost to fly with the time you have to spend at the airport, traveling become more of a hassle than a relaxing experience,” added Cirgliano. “It is important to RedCoach that our passengers experience stress-free travel, which is why we require passengers to arrive only 15 minutes before departure. But most importantly, we believe everyone deserves a comfortable travel experience at an affordable rate.”

Headquartered in Orlando, RedCoach has provided comfortable and convenient, yet affordable, express line-run service for more than a million travelers and has traveled over 23 million miles throughout Florida since its launch in 2010.

For more information and to purchase tickets, please visit www.redcoachusa.com.

Begin typing your search above and press return to search. Press Esc to cancel.